Back to The Backstreets

23nov3:00 pmBack to The Backstreets 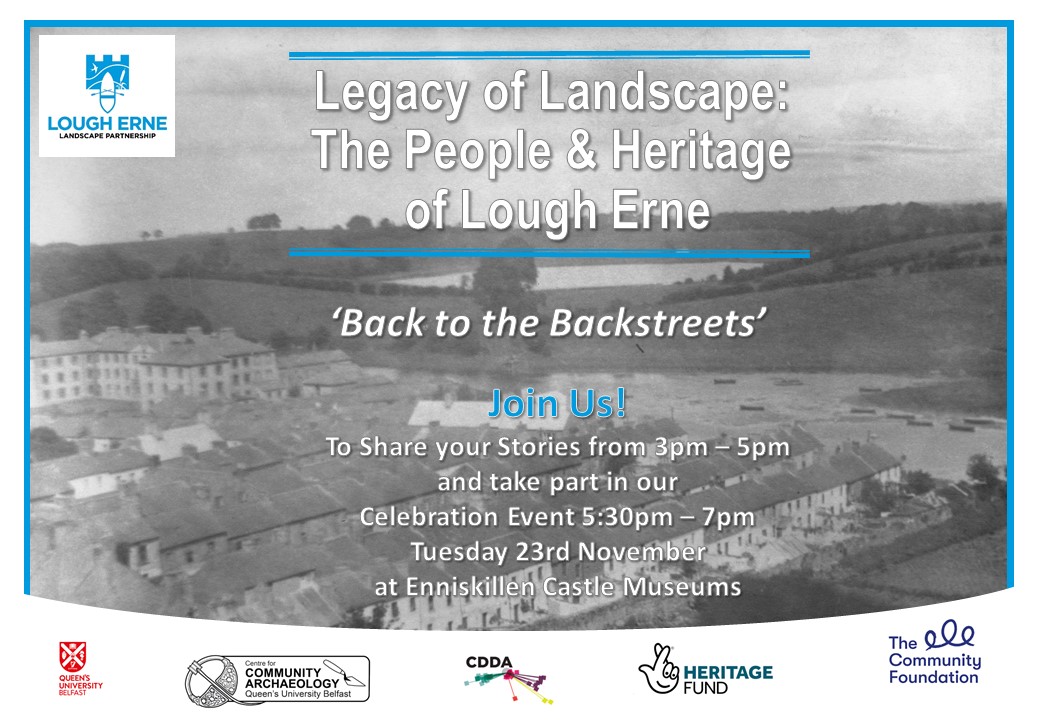 BACK TO THE BACK STREETS: A CELEBRATION Reminiscing about the Backstreets of Enniskillen Many of you over the weeks will have seen

BACK TO THE BACK STREETS: A CELEBRATION

Reminiscing about the Backstreets of Enniskillen

Many of you over the weeks will have seen or indeed may have taken part, in the exciting archaeological dig in the Queen Street area of Enniskillen, previously known as the “Backstreets.”. The Lough Erne Landscape Partnership invite you to join them on Tuesday 23rd November at the Enniskillen Castle Museum to learn more about the findings of the dig; to share your stories and memories and to celebrate Enniskillen’s “Backstreets” area and the people who lived there.

Now framed by Queen Street and Head Street and the location of the Enniskillen Library and the Fermanagh Housing Executive Offices, the “Backstreets” was once home to  a vibrant community, living in terraced houses on the island of Enniskillen. During the 1960s, however, the inhabitants were moved to new housing estates on the outskirts of the town at Kilmacormick and Cornagrade; the old houses were demolished.

Fascinating memories of life in the “Backstreets” were published in a book – A Dander down the Streets (1988) – edited by Bernadette Layden. Interest in the stories of the streets continues to have resonance within the town. For this reason, and working with Catherine Scott (Enniskillen Castle Museums), the Lough Erne Landscape Partnership (LELP) included the “Backstreets” as one of their keynote heritage projects, funded by the National Lottery Heritage Fund. This included an archaeological excavation that was conducted in October, led by Brian Sloan of the Centre for Community Archaeology at Queen’s University Belfast, and which saw 197 school children from the town take part in the fieldwork.

The event at the museum will commence at 3.00pm and we invite people to come along and share their stories and experiences of the “Backstreets.”  This will be followed at 5.30pm by a series of talks on the “Backstreets”, commencing with Catherine Scott and Bernadette Layden, discussing the oral history associated with the streets. Brian Sloan will then present the results of the archaeological excavation, assisted by one of his star young local archaeologists from the dig. The celebration will then hear from the Fermanagh Genealogy Centre about their  work on the association of the “Backstreets” with the Dardenelles campaign of 1915 during the First World War.

Covid restrictions mean that numbers attending the event will be limited so to book a place in the storytelling sessions or attend the evening celebration contact Heather Gott at heather.gott@rspb.org.uk or 07738116385.