This project aimed to train local people to become heritage champions within the Cuilcagh Lakelands Geopark.

The Cuilcagh Lakelands Geopark (CLG) covers large swaths of public lands with over 70 sites across West of counties Fermanagh and Cavan has an abundance of unique, exceptional, and rich natural, built, and cultural heritage throughout. It is extremely important to not only conserve this area for generations to come but also educate those living, working, and visiting the area. It is hoped that when people visit sites within the CLG that they enjoy the wonderful, rich heritage and connect with the landscape.

The Heritage Champions programme was delivered virtually due to the Covid-19 pandemic and consisted of 10 online sessions that were co-ordinated by Travel and Tourism Associates. Topics were delivered by local subject experts in areas such as UNESCO Global Geoparks, geology, geomorphology, archaeology, biodiversity, event management and tour guiding.

Due to the success of this programme the CLG are now working again in partnership with the Lough Erne Landscape Partnership to offer OCN qualifications. Please visit Project 12 : Heritage Skills and Training for more information.

Previously held in 2019, the Lough Erne Schools Convention was a one-day event, however this year, due to Covid19 restrictions, groups of enthusiastic Key Stage 2 pupils from local primary schools have been welcomed over a series of five days. Each day, pupils from P5 to P7 got to experience Upper Lough Erne from their canoes with the Share Discovery Village and learn about its inhabitants and environments through heritage providers and local organisations.

Cuilcagh Lakelands Geopark provided a very exciting workshop about the Fermanagh Landscape and it’s ancient connection to volcanoes and earthquakes. These workshops where delivered by Kevin Baker and Ian Sturdee, both of whom are Heritage Champions.

In total thirteen different schools attended bringing over 500 pupils to the Convention, and despite a couple of rain showers all teachers, pupils and providers enjoyed the activities provided.

See pictures below of Ian and Kevin delivering at the 2021 Schools Convention. 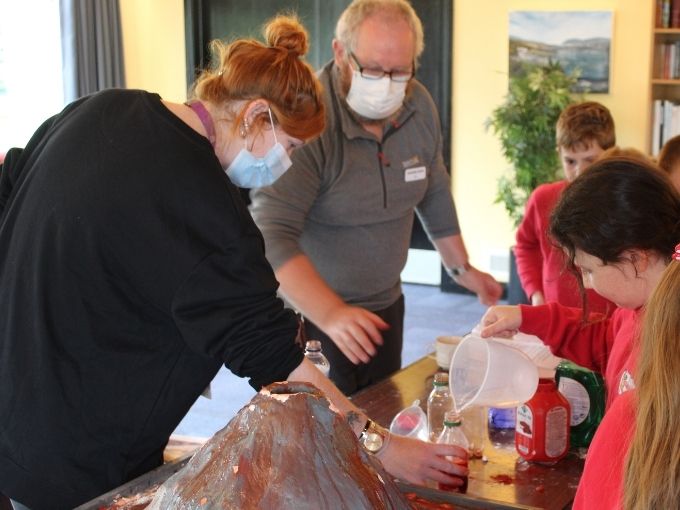 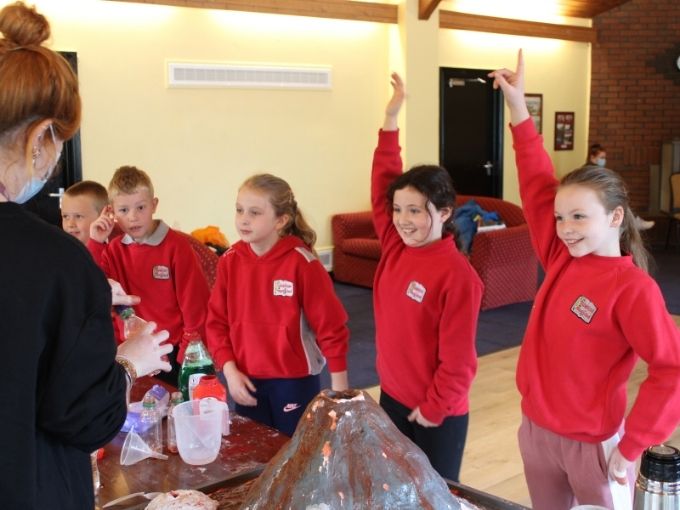 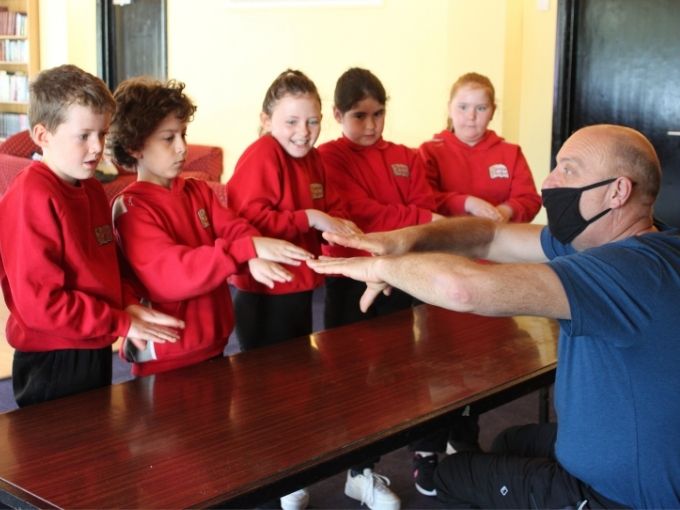 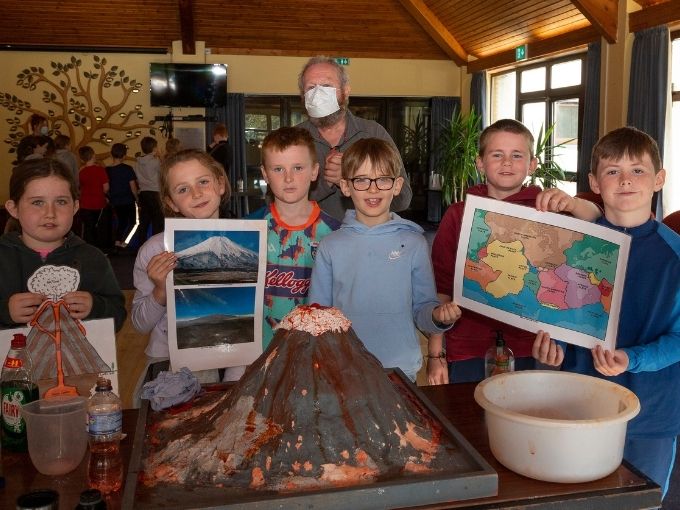 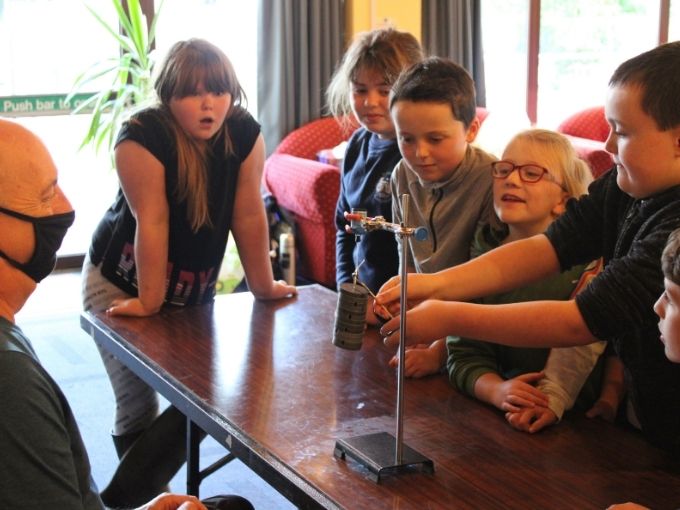 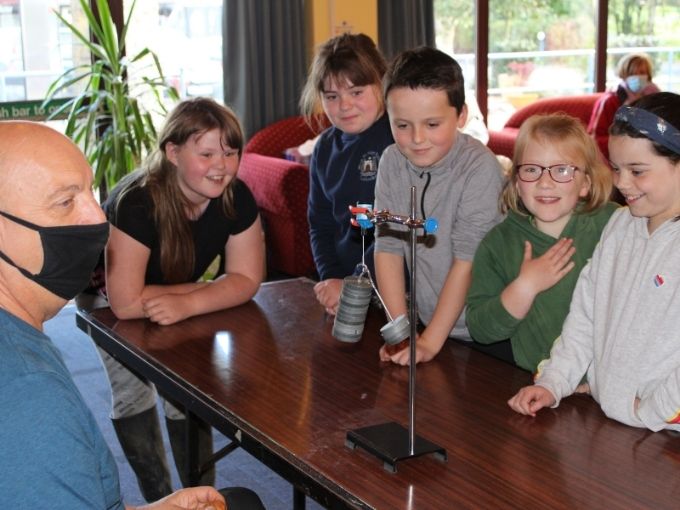 Secret Life of the Honeybee, a Heritage Champions project – August 2021
Kevin, a geopark guide and heritage champion is also a passionate bee keeper, check out his video below giving a quick glimpse into the secret live of honey bees: Secret Life of Honeybees : Part 2
The bees have been working hard during our spell of good weather in July by producing honey for the winter and rearing large numbers of new bees. The two colonies have been expanding rapidly, requiring them to be split into new hives to prevent swarming. The honey supers are starting to fill and a new queen has hatched.
Checkout Project 9 Lough Erne Amazing Pollinators for more information about bees.
Celebration of Craft Month, Spoon Carving – August 2021
August marks Craft Month in Northern Ireland, which is a unique celebration providing opportunities for the public to learn about a craft.
A Geopark Guide and Heritage Champion, Tony Smith from Oakwood Bushcraft Forest School & Wilderness Living created a short video on the tools and techniques required to carve your very own wooden spoon.
Check out the video Tony made here: Spoon Carving in Co. Fermanagh : Tony Smith
Network of Heritage Champions – March 2021

It is hoped that when people visit sites within the Geopark that they enjoy the wonderful, natural environment and connect with the landscape. One way we encourage this is through our cohort of almost 20 Geopark Guides.

The Geopark established a group of Geopark Ambassadors in 2011. This group are crucial to the delivery of their engagement programme. With their on-going support, assistance, and enthusiasm, the Geopark are able to deliver a truly diverse programme to engage with locals and visitors alike. Using the funding from LELP a Co-ordinated Education Training Programme to enable the creation of a further network of 20 Heritage Champions.

The Geopark Ambassadors and Heritage Champions act as an important conduit for meaningful community engagement within the Geopark. It provides an opportunity for new community based sustainable tourism projects and initiatives to be developed and most significantly ensures that local people have the skills, knowledge, and expertise to ensure that the unique and special landscapes of the Geopark are understood, interpreted, and celebrated by all for many generations to come.

Since the completion of the online training the Heritage Champions have designed and delivered a number of successful events, including:

See below, pictures taken from some of the Heritage Champion led events.

For more information and to meet some of the Heritage Champions visit Cuilcagh Lakelands Geopark : Communities 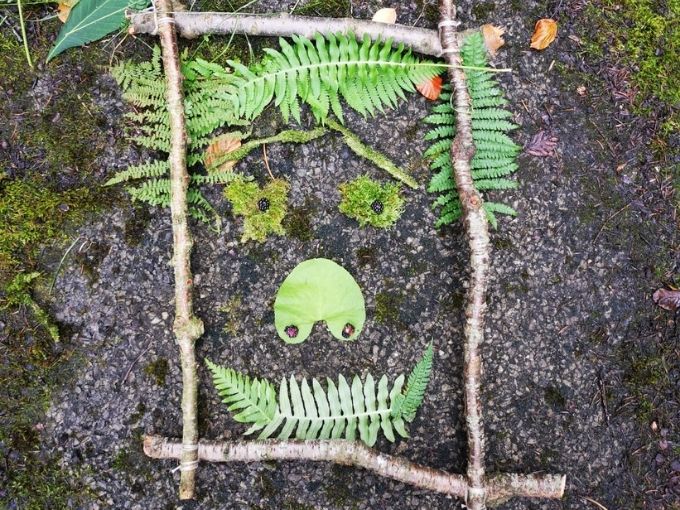 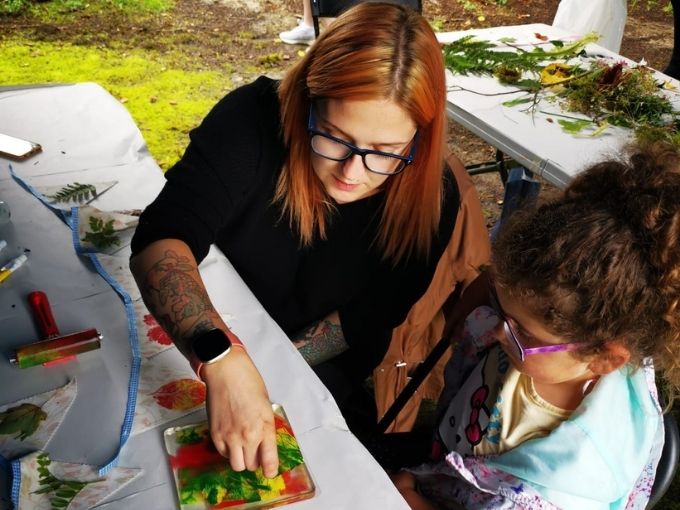 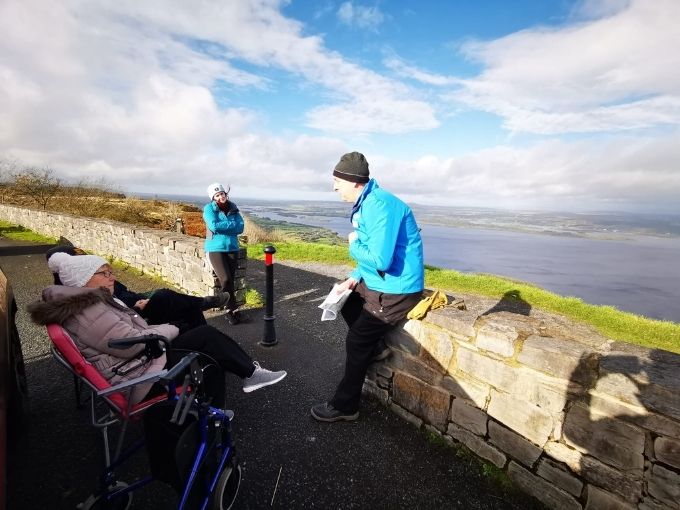 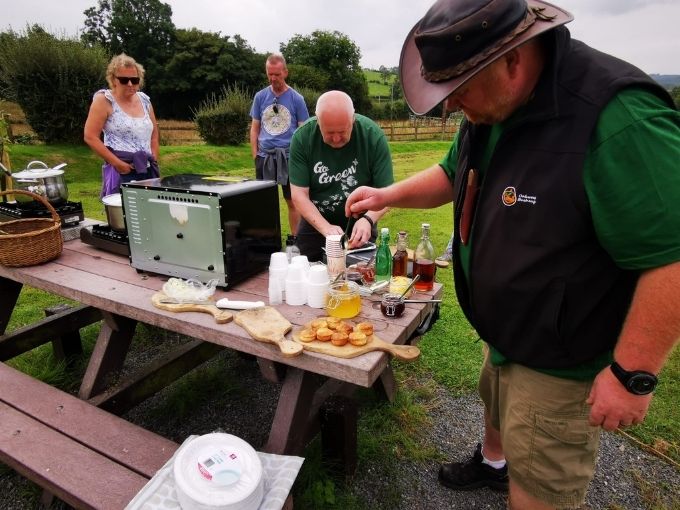 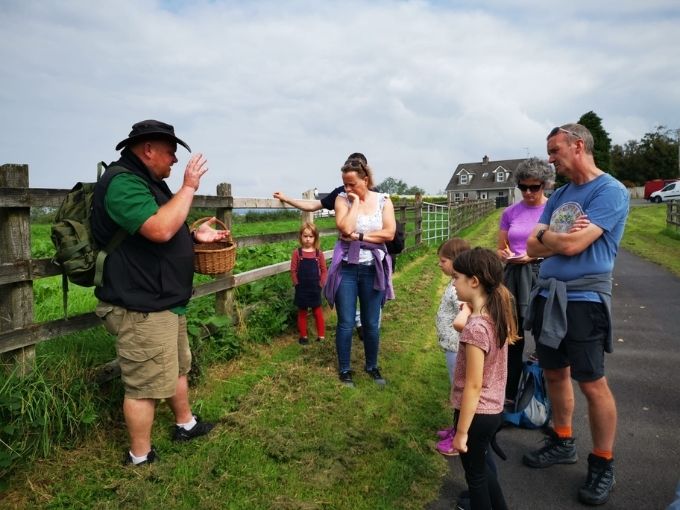 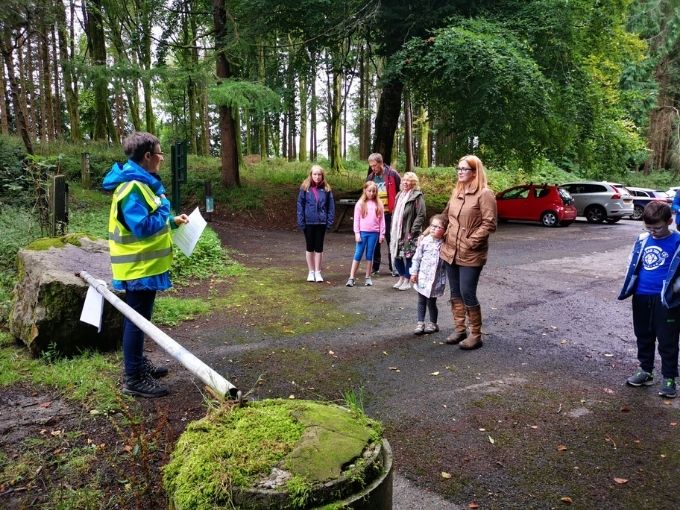 The Marble Arch Caves UNESCO Global Geopark (MACUGG) has added to their existing Geopark Ambassador cohort by training 20 local community heritage enthusiasts to become Geopark ‘Heritage Champions’ in West Fermanagh. In 2020, the MACUGG secured funding via the Lough Erne Landscape Partnership National Lottery Heritage Fund to roll out a Co-ordinated Education Training Programme to enable the creation of a network of 20 Heritage Champions.

Speaking about the programme, the Chair of Fermanagh and Omagh District Council, Councillor Armstrong said, “The Heritage Champions will act as an important conduit for meaningful community engagement within the Geopark. It provides an opportunity for new community based sustainable tourism products and initiatives to develop and most significantly ensures that local people have the skills, knowledge and expertise to ensure that the unique and special landscapes of the Geopark are understood, interpreted and celebrated by all for many generations to come”.

Elmarie Swanepoel, Lough Erne Landscape Programme Manager added “The Lough Erne Landscape Partnership are delighted to work in partnership with the Marble Arch Caves UNESCO Global Geopark to support the training of 20 new heritage guides. These passionate individuals will be great ambassadors for our region to share the unique stories of our area to bring the natural, built and cultural heritage to life. We celebrate the achievement of each of these participants who took part in the programme and look forward to the future to offer a further programme of accredited Tour Guide training within the wider Lough Erne region”.

Martina O’Neill, Development Officer – Partnerships & Engagement added, “We were delighted with the participation and positive feedback from the Heritage Champions programme and look forward to working with our Heritage Champions in Fermanagh and continuing to work with our Geopark Ambassadors in Cavan to ensure the unique stories of the Geoparks special landscapes are told allowing us to connect with and enjoy the wonderful rich heritage of the Geopark in a sustainable way”.

The Heritage Champions will now join the Geopark Ambassadors who were established in 2011 and are a critical link to their respective communities in West Cavan and whom with their on-going support and assistance over the years, have enabled the MACUGG to operate a truly diverse and exciting programme of activities and experiences allowing locals and visitors alike to explore, enjoy and learn more about the Geopark and its unique heritage.

See below pictures of some of the successful Heritage Champions who completed the training. 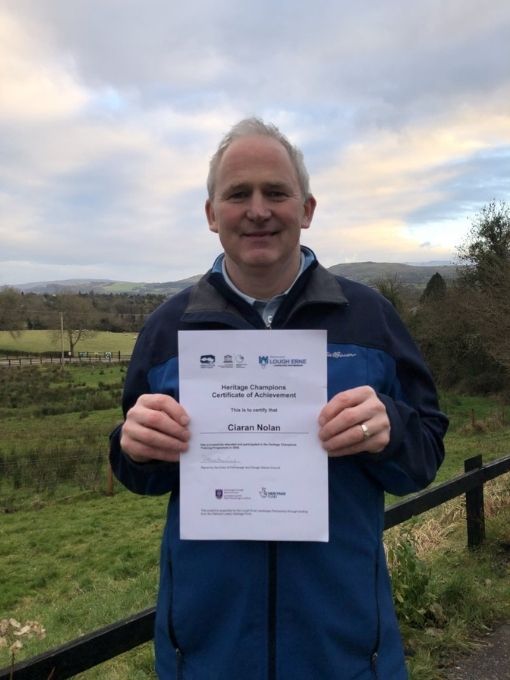 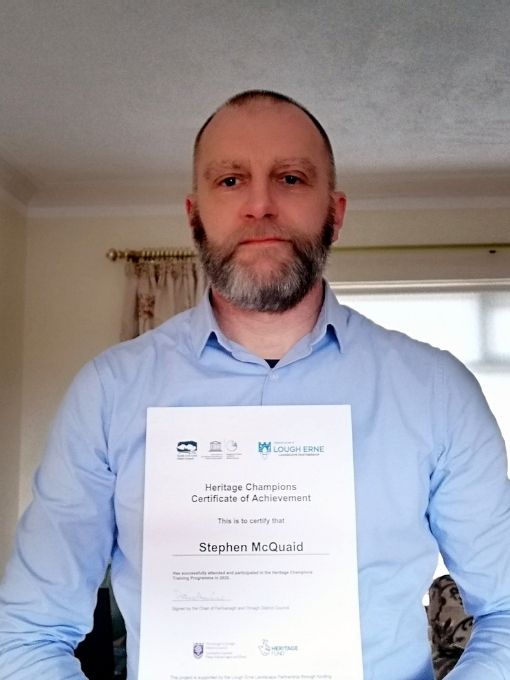 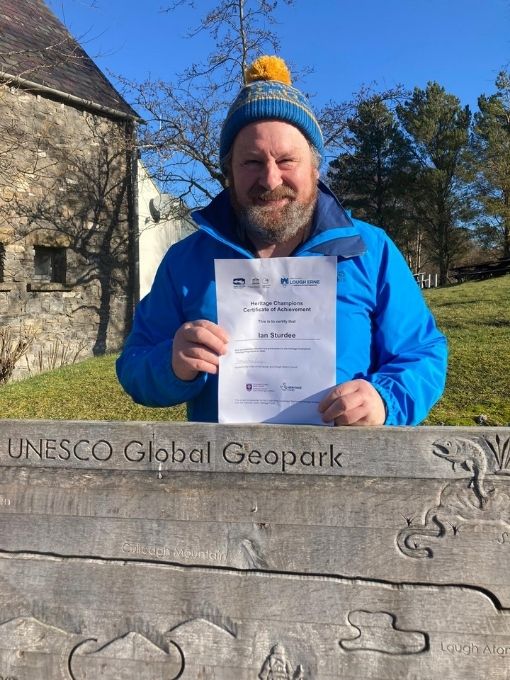 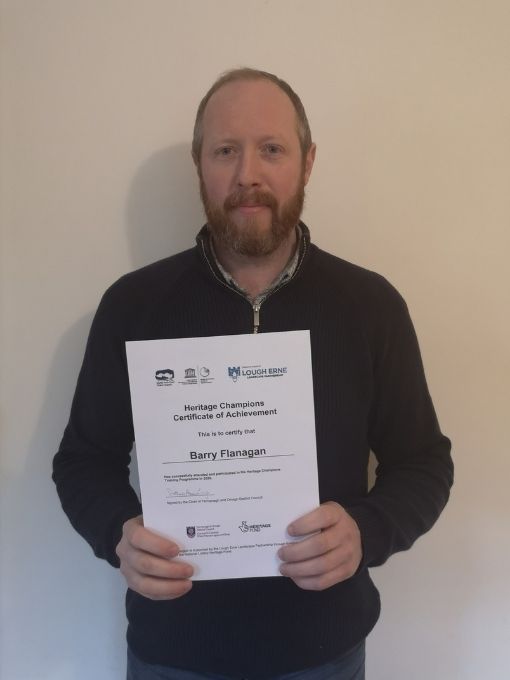 The Heritage Champions programme was delivered virtually due to the Covid-19 pandemic and consisted of 10 online sessions that were co-ordinated by Travel and Tourism Associates. These included:

Fermanagh and Omagh District Council invite Quotations for the Supply and Delivery of a Co-Ordinated Education Training Programme.

The Marble Arch Caves UNESCO Global Geopark is one of Ireland’s best examples of sustainable tourism. Straddling the border between counties Fermanagh and Cavan the Geopark allows visitors to appreciate the best of what this unspoilt border region has to offer. Jointly managed by both Fermanagh and Omagh District Council and Cavan County Council, the Geopark covers almost 20,000 hectares of public land from the northern shores of Lower Lough Erne in Fermanagh to the southern shores of Lough Oughter in Cavan.

As part of the overall Lough Erne Landscape Partnership (LELP), the Marble Arch Caves UNESCO Global Geopark (MACUGG) have secured funding from the National Lottery Heritage Lottery Fund to deliver a Co-Ordinated Education Training Programme which will enable the creation of a network of ‘Heritage Champions’ by piloting an education training programme where participants complete a core set of guiding modules. With expert instruction participants will be trained on how to become a ‘Heritage Champion’ and on how to guide both locals and visitors that wish to visit and experience the Marble Arch Caves UNESCO Global Geopark.

A copy of the RFQ and further information is available to download by clicking here? (if a website notice) Or by visiting www.marblearchcavesgeopark.com or www.lelp.org.uk (for Social Media notices) or by e-mailing clarissa.beacom@fermanaghomagh.com . Closing date for submissions is 12:00 noon on Friday 7th February 2020.